Casper Sleep (CS) is a new mattress company, less than a year old at the time of this writing. Already it has received a lot of attention, in regular news media (such as the Wall Street Journal) and among online technical and lifestyle media. CS attracted a significant amount of venture capital and private equity investment, and the level of sales to date indicates that this is a profitable choice so far.

Casper Sleep was founded by Philip Krim and four friends. Their goal is to offer an alternative to the way mattresses are designed, produced and sold. Their early promotional video begins with a young adult's dissatisfying shopping experience in a mattress store: too soft, too firm, too expensive, too many choices, too pressured. These five decided to make it easy and inexpensive to buy a good mattress. So they aimed to find out what would satisfy most consumers. In order to try out mattress designs themselves, they set up mattress testing rooms in the company offices above their New York City showroom.

Don't expect a page-long list of models by this mattress company. They are selling only one model in several sizes. Casper Sleep has settled on a fused-foam hybrid mattress combining the benefits of memory foam and latex. The production is described as "Vertically Integrated, Horizontally Optimized. We engineered the Casper mattress with zero respect for the rules." According to them, the Casper Mattress "meets the coveted Goldilocks standard of just right."

The manufacturing of the Casper Mattress begins with textile production in South Carolina, Illinois and Belgium. It moves to foam making in Pennsylvania and Georgia with mattress assembly in Georgia. The finished and vacuuum-packed boxed-bed mattresses are then shipped to New York for distribution. In NYC this is delivered by bicycle from the Bond Street showroom to addresses within the city. 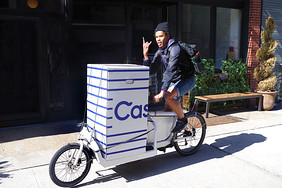 Casper Sleep features a 100-night trial period and a 10-year warranty for their mattress. They are planning to expand into selling pillows, sheets and other bedding items. Currently, they do not sell foundations or frames. They do recommend placing the Casper Mattress on a platform foundation.

Here are the current reviews for beds from "Casper Sleep"