Eastman House dates back to 1866, when H. Bailey & Co., a furniture store, was started in Burlington, Iowa, by a dentist and a writer. With partners leaving and joining the business, the company eventually became Chittenden & Eastman in 1883. It became a furniture manufacturer, then began making mattresses.

In 1975, Chittenden & Eastman stopped making furniture. In 1993 the company expanded its market to New York and the Northeast.

In 2003, Chittenden & Eastman planned to move its productiion to Missouri.  Four years later, the company was owned by CIT Factors, which was facing liquidation. Chittenden & Eastman was purchased by Stuart Carlitz, the owner of Therapedic and Eclipse Bedding, and became a part of Bedding Industries of America. It was renamed Eastman House Bedding

Nineteen factory locations are listed by Eastman House Bedding. Three are in the United States. The others are all over the world. Seven are in Australia (licensed to A.H. Beard). The other locations are in New Zealand (also A.H. Beard), Korea, China and Taiwan, India, Singapore, Brazil, Pakistan, and Turkey. Several of these distribute in more than one country. 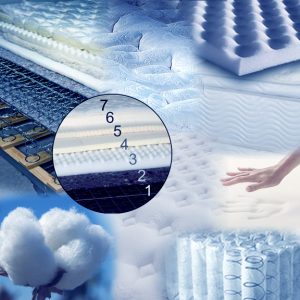 Mattresses in the rest of the series have encased (pocket) coil support. In the Heritage Collection, these innerspring mattresses have 713 coils, featuring Eastman's Spinal Zone Sleep System. Some of these are coil-on-coil. The Traditions Collection mattresses have a coil count of 941.

The English Hand Tufted Collection is the luxury series with higher mattresses. Like Tradition Collection models, they have 941 coils in Queen size, but they have more substance in the comfort layers with a variety cushioning materials. And all the mattresses are hand-tufted, similar to other luxury mattress lines.

Eastman House Bedding makes its own foundations. These are box bases and box springs. They also sell metal bed frames.

Warranties for Eastman House mattresses range from 5 to 20 years, depending on the series and model. EHB does not sell directly to consumers, but through retailers.

Here are the current reviews for beds from "Eastman House Bedding"