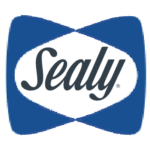 In the small town of Sealy, Texas not far from Houston, a cotton gin builder and operator, Daniel Haynes filled a request from a neighbor and built a cotton-filled mattress in 1881. Daniel Haynes began receiving more requests from neighbors and relatives. Thrilled by the response, Haynes invented a machine that compressed cotton for use in mattresses and received a patent for his invention in 1889.

In 1906, Haynes sold all of his patents to a Texas Company that took the name of Sealy.  In 1950, Sealy introduced the first  Sealy Posturepedic brand mattress. In 1956, Sealy became the first Company to display and advertise king sized bedding another Sealy innovation.

The 1970's brought major product developments and refinements. Sealy Posturepedic became high tech with a new coil in the innerspring that was specifically designed with programmed response for increased support. During the same decade, Sealy box springs became known as foundations, due to the replacement of springs with the development of the torsion bar modules.

In December 1983 Sealy purchased the Stearns & Foster Company. This firm, founded in 1846, had a long and successful history under its two founding partners, George S. Stearns and Seth C. Foster. The brand was primarily distributed  east of the Mississippi River and through major department stores.

The 1980's saw the introduction of a new innerspring innovation – the Sealy Posturetech Coil with "sense and respond" features now used in Sealy Posturepedic mattresses.

In 1994 Sealy decided to expand its International horizons. As a result of this strategy, a new International Division was formed to assess world-wide opportunities, while developing a team to execute a global strategy.

In the mid-1990's, the Company repositioned Stearns & Foster as an upscale and luxury branded line of bedding.

Today, within the United States, the Company owns and operates 17 bedding plants, 3 plants dedicated to the manufacture of innerspring and foundation component parts for use in the assembly of Sealy and Stearns & Foster mattresses and foundations, and one Latex processing plant.

Sealy, Inc. has maintained the number one market share position in North America for more than three decades and is prepared and positioned to continue its leadership in the design, manufacturing and marketing of premium bedding products. Sealy now has three major divisions that make them a formidable competitor in the mattress industry Sealy, Sealy Posturepedic and the Posturepedic luxury collection.

Sealy revamped its product lineup and its website in mid-November 2013. Four brands are listed: Sealy® Brand, Sealy Posturepedic®, Optimum™ and Stearns & Foster®. Series or models are listed under each brand. Each category has tabs for "Features", "Options", "Safety & Care", "Warranty", and "You may also like..." The "Features" tab groups the features according to Comfort, Support and Value. The "Options" tab lists the customer's choices in available sizes, foundations, and comfort levels. "Safety & Care" tells how to take care of and clean your Sealy mattress. "Warranty" is self-explanatory. "You may also like..." shows other Sealy mattresses which may interest the customer.

Cocoon By Sealy has its one online-only bed-in-a-box mattress and is sold from the Sealy website and on Amazon. It now has two models and two firmness options.

The other three lines are only available through retailers. Each of these three lines has three collections: Essential, Performance, and Premium.  The Performance and Premium collections have Sealy's Posturepedic Technology™, which adds extra support to the middle third of the mattress.

Essential has the non-Posturepedic models. Response  Essential corresponds to the Sealy Mattress line of innerspring mattresses. The Conform Line is the successor to the Optimum Series.

The Response, Conform, and Hybrid lines are described in more detail in the 2019 update of the Sealy Posturepedic review.

Here are the current reviews for beds from "Sealy "