Leesa Sleep is not the first and not the last mattress manufacturer which makes only one mattress model, and sells it only online. There are several others in this current trend, some of which are reviewed here: Casper Sleep, Yogabed, Tuft & Needle, Saatva, and Lull. Most of these are all-foam mattresses, which are compressed, sealed, and fitted into boxes for delivery by FedEx or UPS.

Few of the founders of these companies are new to making mattresses. Most, including Leesa Sleep, were founded by industry veterans who saw a way to make a better mattress and bypass the stores. Leesa was co-founded by Jamie Diamonstein and David Wolfe. Diamonstein is a member of the controlling family of Paramount Sleep. In fact, he is a former president of PS. In this respect, we can be sure that he knows about designing, making and selling mattresses.

So how did such a highly placed bedding business veteran become involved with a startup selling only one mattress? Let's let Leesa tell us:

Why we started Leesa

Like so many people, the entrepreneurs behind Leesa had trouble sleeping. We bought beds offering all sorts of benefits, from coils to memory foam - nothing worked. What’s more, the experience of trying out mattresses in showrooms with a salesman peering down on us was horrible. None of the features actually helped us sleep better – probably because most of them were hocus-pocus.

We approached a friend and long-time industry veteran and asked, “If you could redesign the mattress and reinvent the sleep experience, what would you do?” His response was “I’d simplify it and take out all the “stuff” we’ve been adding for years to justify higher prices.”

From this idea, Leesa was born. The Leesa mattress is a completely redesigned mattress the inside out, and it feels as good as it looks. We’re really happy that those who have tried it say that it delivers a better sleep experience, night after night.

The stated mission of Leesa Sleep is in line with this:

Our mission is to help people sleep better. We design, create and sell thoughtful products delivered straight to your home. Customer experience is at the heart of everything we do and we run our company with integrity for our customers, suppliers, and employees.

We give back by supporting people who struggle to afford a place to rest their head at night.

The last part of this is borne out by Leesa's donation of hundreds of mattresses to the Seattle Union Gospel Mission for their homeless shelter.

How does the Leesa Mattress differ from other mattresses?

The most noticeable difference between the Leesa mattress and others is in the top layer. Here is where Diamonstein's experience and connections come in. The top layer is made of Avena® foam. Avena was developed by Carpenter Co. of Richmond, VA, just up the road from Norfolk (home of Paramount Sleep) and Virginia Beach (home of Leesa).

Carpenter has been making latex and urethane foams in this country since 1956. According to Carpenter, "Avena™ is the next generation of comfort and support material." They use this foam in their own lines of toppers and RV mattresses.

There are literally dozens of comparisons online between the Leesa and Casper Sleep mattresses. The top layer of Casper is latex. Most of the comparisons rate Avena as better than latex. In other comparisons, it is favored over memory foam. As the illustration from Carpenter shows, Avena looks like Talalay latex with the molded-in ventilation. 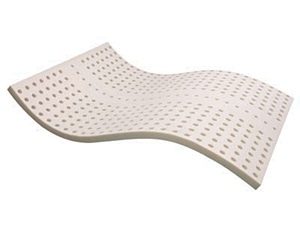 Testers rate Avena as more supportive than memory foam, but still conforming. Its big advantage here is being cooler than the visco-elastic material.

The Leesa Sleep website has a Meet the Team page. This covers seven key members with short bios, including CEO David Wolfe. The site also has a blog (link at the bottom of the screen), written by Sharon Nichols Keith, Digital Content, with several articles about sleep.

The Leesa Mattress is priced significantly lower than Tempur-Pedic models, which cost about $2500 for a Queen size mattress. It is compressed and shipped in a box.

Here are the current reviews for beds from "Leesa Sleep"