In February 2014, I posted an article about wood coils, a new kind of mattress innerspring invented and developed by a Hungarian company. Not long before the launch of wooden coils in the bedding market, another new kind of mattress spring was invented and introduced into the market by Willy Poppe, a Belgian. Poppe is CEO of a family-owned bedding manufacturer, Diamond Spring Company, in Sint-Niklaas, East Flanders, Belgium.

Willy Poppe’s invention is the foam spring, an eight-sided hollow column made of memory foam. The column is cut in a honeycomb pattern, which resembles expanded metal. Poppe dubbed this “Octaspring.” the Octaspring can be compressed like a spring. According to Willy Poppe in a video, these MemoryCoils were first used in memory foam pillows. However, while these memory foam springs worked well in pillows, they were not firm enough for mattresses. So the Octasprings were reinforced with the addition of firmer polyurethane. These EcoSprings could be made soft or firm or somewhere in between.

Now a grid of Octasprings would be the support core of a mattress. With a 1″ foam layer between, one layer of foam springs can be placed on another. Dormeo, a company set up to manufacture and distribute Octaspring memory foam matresses, has models with one to three foam core layers. 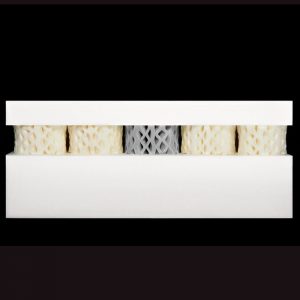 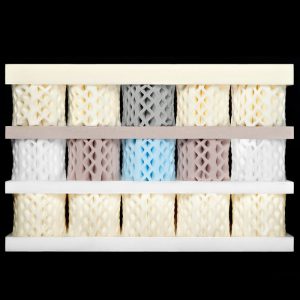 One advantage of foam springs instead of metal is that they are not felt the way metal springs are. Also, like the wood coils reviewed earlier, they do not focus environmental electromagnetic radiation on the users. 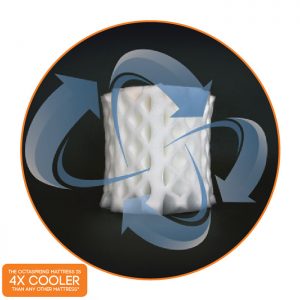 An additional advantage is airflow. The honeycomb cuts go all the way to the open core of the Octaspring, allowing air to flow all the way through. Pressing down on the “coil” forces air out, and releasing pressure lets it back in. So any movement by the sleeper pumps air through the mattress, increasing the cooling effect, another advantage over metal springs.

The article on wooden coils ended with a paragraph asking, “What Will They Make Springs from Next?” Foam springs were already being made, and foam spring mattresses are selling. Look for other firms to develop their own types of foam springs or buy a license to make Octasprings, the way that Tempur-Pedic was quickly and widely imitated in using memory foam. 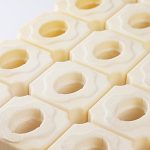 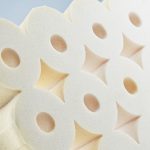 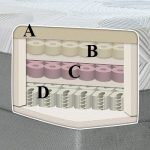 Models in Kingsdown‘s new Elliptica Collection have three kinds of foam coils made with different types of foam. Qualatex Foam Coils are made from Qualatex, a proprietary synthetic latex developed by foam manufacturer Carpenter. Omalon Foam Coils consist of Omalon, a foam also developed by Carpenter. The third kind of foam spring in Kingsdown Elliptica mattresses is the DNA Foam Coil. 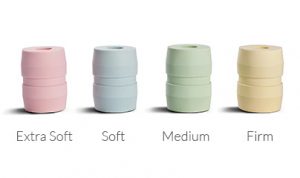 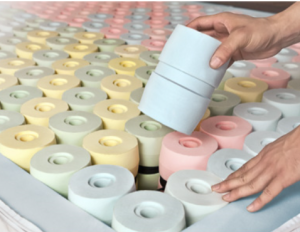 Reverie, an adjustable bed manufacturer, is also a mattresses manufacturer, making mattresses for its adjustable bases. Reverie‘s models are Dream Mattresses with 10″ high latex foam Dream Cells for support and comfort. These foam springs are cylinder-like in shape. Each Dream Cell has a waist with the top and bottom segments tapering toward their ends. Like other foam springs, the core of a Dream Cell is hollow. Dream Cells are color coded, with each color representing one of four firmnesses: Pink for Extra Soft, Light Blue for Soft, Light Green for Medium, and Ivory/Tan for Firm. The cover of each Dream Mattress is zippered so the user can reconfigure the Dream Cells to change the zoning or the overall firmness level.

With two U.S. companies developing their own foam coils, the likelihood of more manufacturers using foam springs has increased. Look for more foam coil mattresses to reach the market in the next few years.

This entry was posted on Thursday, January 15th, 2015 at 9:32 PM and is filed under foam, foam springs, innerspring, mattresses, memory foam, springs . You can follow any responses to this entry through the RSS 2.0 feed. You can leave a response, or trackback from your own site.