Horsehair: The Stuff of Early and Modern Luxury Mattresses 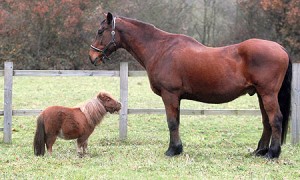 The Stuff of Early and Modern

With just a slip in pronunciation, “sleeping on air” becomes “sleeping on hair,” and is not taken as a joke, because even today horsehair is the stuff (or stuffing) of several luxury mattresses. These include some of the most expensive mattresses in the world, made by high-class names such as ES Kluft and Aireloom, Hypnos, WJ Southard, Hastens, and others. Besides filling, horsehair is also used in the covers or quilting of a few models.

This is nothing new. For hundreds of years, better mattresses were filled with horsehair, along with other natural fibers. Those who could not get horsehair settled for grain husks (chaff), sawdust, straw and other cheaper alternatives. Horsehair was generally for the nobles. Today it is found in mattresses made for English royalty. The feel of a horsehair mattress is used in describing mattresses made by Organic Mattresses, Inc., even though they do not contain horsehair. 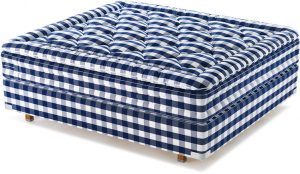 A Continental series bed by Hastens

What kind of horsehair is used?

The most common sources of horsehair are the mane and the tail. Some of this is obtained by collecting loose hairs from grooming, but most comes from clipping hairs from manes and tails. Body hairs of shaggy northern horse breeds could conceivably be harvested in late Spring, but that is currently unheard of for commercial production.

Horsehair is classified by the length of the hairs. The longest ones (6″ or longer) are called horsetail hair, the medium ones (4″ to 6″) tail hair, and the shorter ones (under 4″) horsehair. This means that horsehair contains some of the shorter horsetail strands. And, depending on the processor, some tail hair and horsehair can have some hair from cattle in it.

Horse hairs are hollow, so they funnel air through the batting. This serves to ventilate a mattress and keep it dry. Being hollow also makes them more resilient. Horsehair is also a very durable material. Some horsehair mattresses have lasted 80 to 100 years. Tail hairs are used in violin bows, and can last a long time even with frequent use.

Often horsehair is used in combination with other natural materials, such as wool, linen, cashmere, cotton and latex. Sometimes two fibers are mixed, but these components are usually in separate layers. 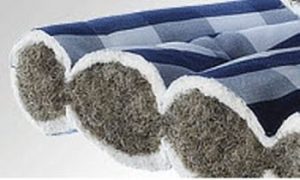 In closing, here is a quote from the NovosBed website:

Horsehair: the stuff of luxury for those for whom luxury is a given. Care to hazard a guess as to which is the mattress of choice for the Queen of England? Your average oil sheik? Billionaire-otherwise-obtained? They’re all sleeping on horsehair.

This entry was posted on Friday, May 29th, 2015 at 5:42 PM and is filed under cover, fabrics, fibers, mattress covers, mattresses, upholstery . You can follow any responses to this entry through the RSS 2.0 feed. You can leave a response, or trackback from your own site.

5 thoughts on “Horsehair: The Stuff of Early and Modern Luxury Mattresses”