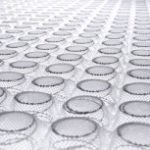 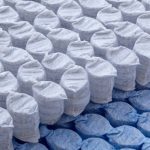 A previous blog article, Microcoils, covered the use of coils in mattresses that are significantly smaller than innerspring coils. In this article, I noted that some of these smaller coils are much smaller than others, and that there has not been a concensus on terminology.

Until now, the whole category of small springs has been classified as microcoils. But now several manufacturers are placing two layers of these coils above the support core of a mattress. Typically, the coils in one layer (usually the upper one) are much smaller than those in the other. Attempts at differentiating these have been inconsistent. Some call the smaller springs “mini-microcoils,” and some “micro-minicoils.” So which way is it?

Two mattress manufacturers now use terms that make sense. European Sleep Works and Berkeley Ergonomics call the larger European-manufactured coils (2-4 inches) “minicoils” and the smaller ones (1″ or less) “microcoils.” This makes sense, because in common usage “micro-” is smaller than “mini-.”

I propose using this order of terms, first defining “minicoils” as those 4″ or less in height, and much smaller ones as “microcoils.” The real question is, “Where do we draw the line between minicoils and microcoils?” This could be at a certain coil height, such as 2″ or 1½”. On the other hand, small coils with a height smaller than their diameter could be called “microcoils.”

If mattress component manufacturers, such as HSM Solutions and Leggett & Platt Bedding Components, adopted consistent standards for terminology, mattress descriptions would be less confusing to consumers. Some elements in the industry seem to make it hard for a customer to compare one model with another. But overall public confidence in bedding manufacturers would benefit from clarity rather than obfuscation.

This entry was posted on Thursday, December 3rd, 2015 at 3:54 PM and is filed under coils, innerspring, minicoils . You can follow any responses to this entry through the RSS 2.0 feed. You can leave a response, or trackback from your own site.