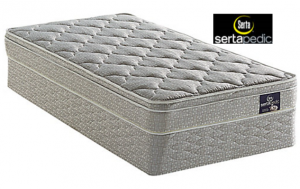 Jack and Jill are shopping for a new mattress. They visit a couple of mattress stores, several furniture stores, and a department store. Just so they don’t miss anything, they check the Internet. Jill read that some brands and models are sold only online.

“Hey!” Jack says, “We didn’t see that when shopping for our first mattress.”
“See what?”
“Pillowtop mattresses.”
“That must be something new,” Jill remarks.
“We’ve had the Serta for over 25 years,” Jack adds. “A lot can be new in that time.”

Let’s face it; there have been a lot of new things in mattresses in the past quarter century. If it’s been that long since you’ve shopped for a mattress, there’s a lot to find out.

Jill points at the screen. “This model is called a ‘Euro-top.’ What is that?”
“I don’t know,” Jack replied. “Maybe it’s just another name for a pillowtop. What’s the difference? I saw a ‘box top‘ earlier.”

Well? What is the difference between a pillow top and a euro top? Or a box top, for that matter?

First of all, some owners of mattresses found their mattresses were too firm. This was especially true during the time when it was commonly thought that firmer was better for back support. Mattress pads, or toppers, were sold to soften the feel of the bed without having to spend for a new mattress.

Mattress manufacturers have been adding padding to one or both sides of a mattress to soften the feel. Thicker and softer padding is used to make a mattress plusher. This can be done without sacrificing the underlying support of the innerspring or the base foam.

These mattresses can be made even plusher by adding a topper. Toppers have to be held to the mattress somehow. This can be with corner harnesses or with skirts (like a fitted sheet). A topper could shift if not held on tightly enough.

Some manufacturers began sewing toppers to the mattress. Some of these are still called toppers. Then some began to be called pillow toppers or pillow tops, followed by box tops. Essentially, euro tops are box tops. “Euro” sounds more classy.

The distinction between a pillow top and a box top is easy to visualize. A pillow top looks like a mattress-sized pillow sitting on the mattress, while a box top is boxy (squared sides).

The pillow top usually has a single bead around the edge. It is sewn to the top cover of the mattress a little way in from the edge.

The box top, on the other hand, has top and bottom beads. The bottom one is sewn to the top bead of the mattress proper.

The lifetime of a eurotop mattress is generally somewhat longer than a pillowtop model. This is due to the additional edge support.

Not all mattress makers strictly follow the technical distinctions between pillow top and euro top and use the terms interchangeably. Unfortunately, this causes some confusion. Also, some brands call the top layer a “euro top” when the only distinction is a seam an inch or two from the top surface. Technically, a pillow top or euro top is an attached topper, meaning that it sits on top of the top cover or ticking of the actual mattress.

Cutaway view of a pillowtop mattress

As to spelling the term as one word or two, this is not standardized, but some distinction is used by some companies, though not always consistently. In this usage, “pillow top” and “Euro top” are the toppers themselves, while “pillowtop” and “eurotop” are adjectives applied to the mattresses. In other words, a pillowtop mattress has a pillow top, and a eurotop mattress has a euro top.

Jack and Jill bought a medium firm tight-top mattress and a plush topper. After reading customer reviews about high profile plush mattresses sagging, they figured it would be less expensive to replace the topper than the entire mattress. 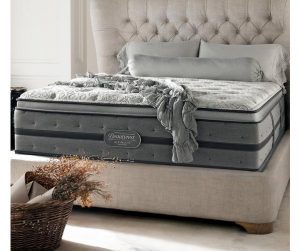 This entry was posted on Thursday, January 14th, 2016 at 11:02 PM and is filed under batting, cover, mattress covers, padding . You can follow any responses to this entry through the RSS 2.0 feed. You can leave a response, or trackback from your own site.

4 thoughts on “Pillow Top or Euro Top: What’s the Difference?”