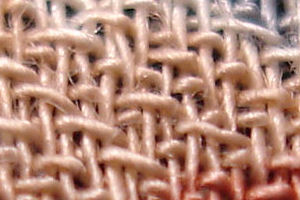 A sample of rayon from a skirt, photographed with a macro lens. from Wikipedia

The oldest man-made fiber is rayon. It is formed of dissolved cellulose extracted from wood. Although almost any woody plant can supply the wood, some of the more common sources were conifers such as spruce, hemlock and pine. That was when most rayon was produced in North America and Europe. Now that the largest producer of rayon is in India, woods from that part of the world are commonly used, including bamboo. In fact, several bedding manufacturers advertise that the rayon they use is made from bamboo.

Artificial cellulose fibers were first made in France in the mid-1800s. Textile producers and fashion designers were looking for a substitute for silk in response to a silk shortage. In 1885, Count Hilaire de Chardonnet patented the first process for making fibers from dissolved cellulose. This process was too expensive for large-scale commercial production. In the early 1900s the viscose process was developed. A thick cellulose liquid was made after several stages. This viscose could be extruded as sheets (cellophane) or fibers.

Since two radically different forms were produced, the Federal Trade Commission sought a separate name for the fibers. Sometime between 1920 and 1926 the name rayon was coined. Probably because the fibers were shiny, the ray was for light. The –on may have been added for cotton, or it may be from the French word for ray: rayon. Now rayon commonly refers to the fiber and viscose for the liquid. However, in Europe the fiber is usually called viscose, for example Magniflex mattresses, and that has been accepted by the FTC as an alternate name for rayon.

The FTC has also ruled that bamboo rayon is not the same as bamboo fibers, and the names of the materials should reflect that. Therefore, rayon from bamboo can be called that or bamboo rayon, but not bamboo fiber(s).

Though rayon is made from a natural, renewable product, the process of extracting the cellulose poses environmental problems of air and water pollution. However, the process is being refined to reduce the waste products in the hope it will eventually become environmentally acceptable.

Rayon has many advantages and uses. It is durable, visually appealing, dyeable, versatile. Because it is cellulose, it has properties similar to those of cotton and linen. It is also now less expensive than cotton, which has its own environmental problems from cultivation. In fabrics, it can be made to resemble cotton, silk or nylon. Rayon has been displaced by polyester in some uses, but it is still a commonly used fiber, especially in bedding materials, such as mattress covers.

This entry was posted on Saturday, October 18th, 2014 at 7:41 PM and is filed under Uncategorized . You can follow any responses to this entry through the RSS 2.0 feed. You can leave a response, or trackback from your own site.