The modern airbed had its beginning with bicycles and automobiles. The first pneumatic tires (inflated with air) used innertubes, rubber tubes filled with air to specific pressures to support and cushion a vehicle at the same time. The technology was developed of manufacturing and sealing the tubes, along with pumps and valves for inflating them and gauges to measure the pressure. Also developed were means of repairing innertubes.

Then came inflatable air mattresses for camping. These could be deflated, rolled up and stored or carried to the next camping site. This made camping much more comfortable, especially when the sleeping area was bumpy. One chamber became two or more to make the surface and the support of the air mattress more even.

The camping mattress became the overnight guest mattress, handy when there were more sleepers than available bed space. flocking or fabric was bonded to the rubber or vinyl mattress.

Eventually, air mattresses made their way into the bedroom and onto the bed. Some people used them as toppers on mattresses that were too firm.

Then regular mattresses were made for the bed, at which point they were called airbeds. ComfortAire had a role in making airbeds popular, with remote controls to operate installed pumps for filling the bed and adjusting the pressure.

Select Comfort launched the Sleep Number bed. Select pressure levels were identified by number. For a two-person bed, each side of the bed was inflated separately, so each sleeper had their own Sleep Number. An ad read, “What’s your Sleep Number?”

Now there are several manufacturers of airbeds. many of these also make waterbeds. At least one producer of many kinds of mattresses, InnoMax, began with airbeds. 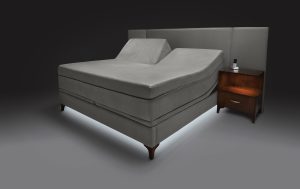 The airbed has been refined until today it is a sophisticated option for a mattress. Comfort materials and quilting have been added, so now there are airbeds with latex, memory foam, gel–foam and pillow tops. The current trend of smart beds includes airbeds, such as the Sleep Number X12. They are often paired with adjustable beds.

So remember, when you are sleeping on an airbed, you really are Sleeping on Air.

This entry was posted on Saturday, May 14th, 2016 at 3:39 PM and is filed under airbeds, beds, firmness, materials, mattresses, waterbeds . You can follow any responses to this entry through the RSS 2.0 feed. You can leave a response, or trackback from your own site.

9 thoughts on “Sleeping on Air”