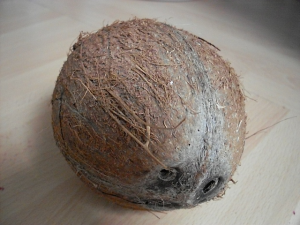 Coconuts are the fruit of the coconut palm (Cocos nucifera), a tree naturally found on tropical coasts. The coconut palm has spread by means of its bouyant seed floating on water, following ocean currents and tides. From beaches, it spreads to nearby low areas by dropped seeds. Coconuts are rather large and heavy for seeds, so coconut palms do not naturally range far from the shoreline. However, cultivated coconuts palms are found inland.

The coconut has three parts: the outer husk, the inner husk (coir) and the seed itself. All three parts have economic significance. The coconut is a source of both food and fiber.

Most people know the coconut as a food source. The solid white meat around the hollow interior is edible, as is the watery “milk” inside. Coconut oil extracted from the fruit is used in cooking. It is also used in cosmetics, lotions, ointments and plastics

Coconuts are also used in bedding, especially mattresses. Some bedding foams use coconut oil as an ingredient. The oil is actually infused into some fabrics as a skin conditioner, but this is not common, because that would have only a short term effect.

The fibers of the coconut are also used in mattresses, especially from the inner husk. These fibers, called coir, are extracted from the soaked hulls. The fibers themselves may be included in matting, such as base pads and insulators in a mattress.

More commonly, coir portions or fibers are mixed with rubber tree sap (latex) and cured, forming a very firm sheet, also called coir. India is a significant producer of this kind of coir. Its use in beds is usually as a base pad or an insulator (separating softer materials from coils). In several non-foam innerspring mattresses with pocket coils, coir is used for edge support.

There are dozens of other uses for coconut fiber, so raising coconuts for food and fiber is an important activity in many tropical and subtropical regions.

This entry was posted on Wednesday, October 7th, 2015 at 9:25 AM and is filed under beds, cover, fabrics, fibers, foam, innerspring mattress, latex, mattresses, padding, plastic . You can follow any responses to this entry through the RSS 2.0 feed. You can leave a response, or trackback from your own site.

3 thoughts on “Coconut and Coir”