I remember when as a child I played with other children on a tilting board, variously called a “see-saw” or “teeter-totter.” Pushing with our feet, we would alternately go up and down. Easy enough to do when we were both close to the same weight.

This was where we learned the principle of the balance scale. When one end goes down, the other goes up. and it’s the heavier end that goes down. That’s the way it was on the see-saw. With an average first grader and a fifth grader, the younger, lighter child sat at the tip of his or her end, and the older one sat closer to the middle. Or, to make it fun, two or more younger children would sit on one end to balance an older child on the other. The message was clear: the larger weight pushed up the lighter weight.

The same principle is at work in some mattresses. The pressure-relief of free-flow waterbeds depends on differential displacement. Heavier and larger parts of the body displace more water than lighter and smaller parts. This means that the entire surface of the body is supported equally. Literally, by displacing the water, larger parts support smaller ones.

If that same sleeper lies down on a board or the floor, the larger body parts would bear all the weight. Pressure sores could develop, with slow bruises on hips, shoulders and knees. Without support, the lower back would sag. The sleeper is likely to wake with back pain and sore joints.

Simple cushioning helps with pressure sores by easing the impact on large joints. But cushioning alone does not support the lumbar, nor keep the head and neck in line with the spine. Innersprings were an improvement over plain padding. Pocket coils are even better than the original Bonnell springs. But the principle here was how far down the different coils were pushed.

That changed with the introduction of the waterbed. The differential displacement of fluid support is described above. But that is not the only see-saw support found in beds today. Besides waterbeds, three current mattress features illustrate this idea at work: Thomashilfen‘s winged slats, Lever Support by Strobel Organic Mattresses, and Air–Assist Option, also by Strobel.

Thomashilfen, a German manufacturer of healthcare and mobility products, conceived the concept of self-adjusting balanced support using winged slats. The “slats” are really rods crossing the bottom of the mattress. Along these rods are paired wings. When the wings on one side of a rod are pressed down by a large body part, the wings on the other side press up. This equalizes pressure on both sides of the rod. One claimed advantage of this is that it will automatically adjust the support when the occupant moves. And it automatically conforms to the user’s size.

The key feature of Strobel‘s Supple-Pedic mattress line is the Lever Support System. These are wire rods in the mattress between the comfort layer and the support layer. They are longer than Thomashilfen‘s wings, and there are more of them. Lined-up head-to-toe, they have the teeter-totter effect, as seen in the illustration. when the hips and shoulders push down, the other ends of the levers push up on the neck, back and thighs. Thus the larger parts support the smaller ones. 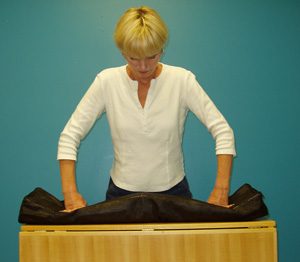 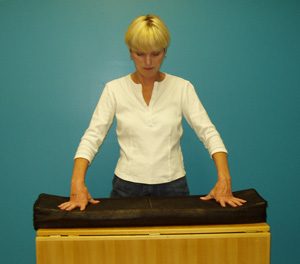 Strobel‘s Air–Assist Option was borrowed from both waterbeds and air beds. A less than hard-filled air bladder is placed under the Lever Support System. A demonstration unit pictured online shows how when the air is pushed down in one or more places, the air pushes up elsewhere. The same effect can be felt on a not quite fully inflated air mattress.

A certain degree of this kind of support may also be found in gel support.

At least two mattress manufacturers have found means other than waterbeds of using the see-saw principle of fluid support. It remains to be seen what other manufacturers will devise to take advantage of this kind of support.

This entry was posted on Monday, May 30th, 2016 at 10:23 PM and is filed under airbeds, beds, gel, innerspring, mattresses, sleep, support, waterbeds . You can follow any responses to this entry through the RSS 2.0 feed. You can leave a response, or trackback from your own site.