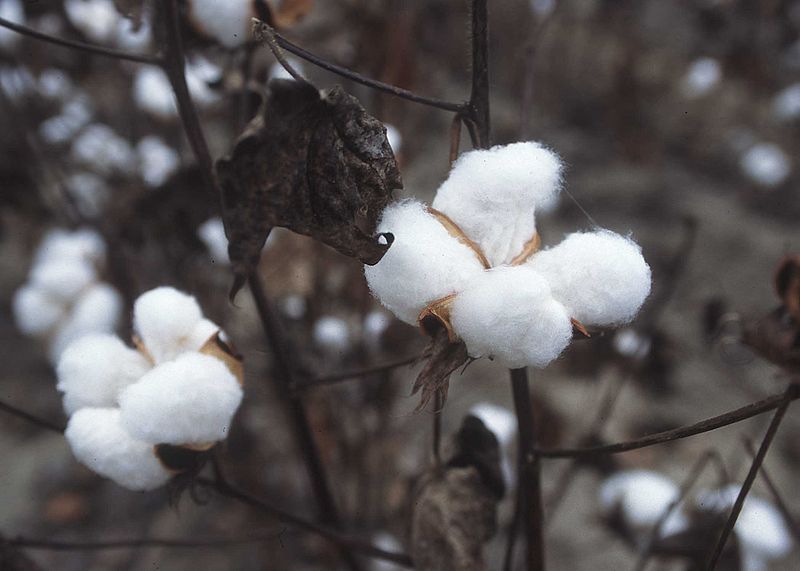 Cotton is made from fibers in the seedpods of plants in the Gossypium genus of the Mallow family. The name “cotton” comes from goz, Arabic for “soft material.” From Arabic comes the Spanish algodon, then English cotton. Cultivation of cotton is as old as civilization in Asia, Africa and Central America. It was introduced into what is now the United States in 1556 in Florida and 1607 in Virginia. The cotton plant grows in tropical and subtropical areas. Alaska cotton (also called cotton grass) belongs to the sedge family and is not suitable for making fabric.

Cotton was originally carded by hand to remove seeds and separate long staple fibers from the shorter lint. Spinning the staple fibers into thread was done on a spinning wheel, weaving on a manually operated loom and knitting by hand. Then in the eighteenth century machine spinning was invented in England and the cotton gin in America, followed in the next century by machine weaving and knitting, making cotton fabrics widely available and affordable. The United States is the largest exporter of cotton, while China is the largest producer.

Cotton, which is almost pure cellulose, is best known for its softness and absorbency, making it suitable for dressing wounds and wrapping babies. Piles of cotton are both supportive and cushioning, making it ideal for filling many early mattresses. Most of those current mattress manufacturers which began in the 1800’s used cotton as padding in their first mattresses. With the invention of innerspring mattresses, cotton batting cushioned the user from the coils.

Cotton canvas was the covering of most early mattresses. Even heavier cotton fabric separated the unwoven batting from the coils. Although foams have replaced cotton as batting in most mattresses, cotton cushioning is still used by several manufacturers. A few of these are Naturepedic, Organic Mattresses Inc., Savvy Rest, Aireloom, E.S. Kluft and Royal-Pedic. Almost all manufacturers have at least some mattresses covered with cotton fabric.

Many manufacturers have models featuring organic cotton. This cotton is not genetically modified and not subjected to chemical pesticides and chemical fertilizers. Non-organic cotton may have residue from chemicals, which could irritate skin in some persons. To be certified as organic cotton, the land where it is raised has to have had no chemicals used on it for at least three years. The cotton also has to have been processed without using certain chemicals. Organic cotton is grown in at least ten nations.

An important advantage of organic cotton is that it is ecologically friendly. Heavy fertilization and pesticide use have harmed the environment in many places.

As new materials are developed and introduced into mattresses, cotton still remains a staple, and for many people it is the material of choice.

This entry was posted on Wednesday, May 14th, 2014 at 9:25 PM and is filed under batting, fabrics, fabrics, mattress covers, mattresses, upholstery . You can follow any responses to this entry through the RSS 2.0 feed. You can leave a response, or trackback from your own site.