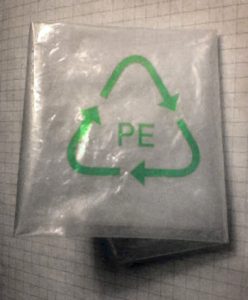 Penicillin was discovered by accident when Alexander Fleming noticed bacteria dying in the presence of certain molds. Vulcanization of rubber by sulfur was also accidentally discovered by Charles Goodyear. In 1898 in Germany, Hans von Pechmann accidentally synthesized polyethylene. It took longer for polyethylene to become widely used than for rubber and penicillin, but now it is one of the most widely used food packaging materials. And it is also being used in bedding. 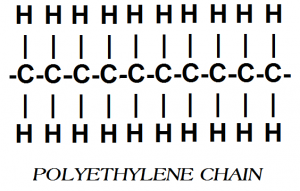 Polyethylene is a polymer. Polymers are made by linking smaller molecules together into long chains or sheets. 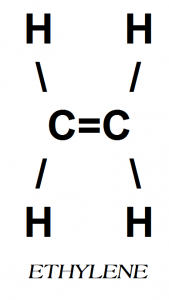 Polyethylene is named after ethylene, the gas it is synthesized from. It is a chain of methyl (CH2) units linked carbon-to-carbon. It is an extremely stable and non-reactive material, which makes it suitable for food and skin contact. It is non-toxic if consumed or inhaled.

Most of the ethylene produced to make polyethelylene is made from petroleum, but it can also be made from ethanol produced by fermentation of plant materials. Unlike “plant-based” polyurethane (in which only a portion of the polyols come from plant oils), it can be 100% bio-generated.

Polyethylene is strong and impermeable to fluids. This is why it is used for food containers and trash bags. This is also why it is used by a few manufacturers (such as Naturepedic) as waterproofing for bedding materials, such as mattress protectors, and mattress covers. Its non-toxicity makes it preferrable to other plastics, such as vinyl, polyurethane and polypropylene.

Since catalysts are used to polymerize polyethylene, there was the possibility of some of the catalyst elements being in the plastic and migrating out of the material. One much-used catalyst has antimony. Experiments show that extremely little antimony migrates from polyethylene when it is there. But antimony does not have to be there. Magnesium chloride, a naturally ocurring salt often found in foods, can also be used as a catalyst, and it causes no concern.

Since polyethylene is very stable, it does not easily break down. This has been a concern for environmentalists, since it can build up in waste landfills. However, bacteria have been found that can digest polyethylene, making it biodegradable.

As of now, only a very few manufacturers use polyethylene for waterproofing covers on mattresses and adjustable beds. Most use sheets of vinyl or polyurethane. Some use high denier nylon, since it is also breathable. It remains to be seen if more will switch to polyethylene.

This entry was posted on Friday, August 14th, 2015 at 6:18 PM and is filed under adjustable beds, beds, cover, mattress covers, mattresses, plastic . You can follow any responses to this entry through the RSS 2.0 feed. You can leave a response, or trackback from your own site.

One thought on “Polyethylene: The Safe Plastic”