Divans and Ottomans: The Alternate Foundations 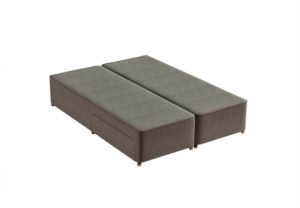 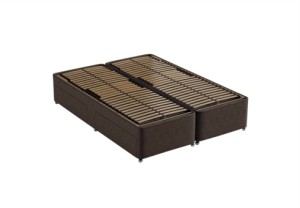 We in North America (United States and Canada) are conditioned to think of divans as some kind of couch or sofa which may or may not have armrests at the ends. Thus we are initally puzzled when a divan is one of the foundations available for a mattress. However, the two usages are related. After all, many people will stretch out on a divan for a nap.

Ottomans, likewise, come from across the Atlantic with a different application than what we are used to. Here an ottoman is a large, fully upholstered footstool. In Great Britain, however, it is a type of divan where the top is hinged to lift up, revealing storage underneath. This feature does relate to some American ottomans, those with a hinged top and interior storage space.

The word divan comes to us from diwan in the Persian language through Turkish and French. It was originally a long cushion (“mattress” if you will), placed against a wall. Sometimes it was on a raised surface. The wall provided a back for sitting. From here it evolved into a self-standing piece of furniture with its own back.

Divans were introduced into Europe in the Rennaisance and into England in the 1700s as both a couch and a bed. In America, the general sense of the term centered primarily on a couch or sofa, while in Britain the sense moved to beds, then more particularly to a boxed supporting frame.

Ottomans were named after the ruling Turkish ethnic group in the Ottoman Empire (Turkey). They came into use in Europe about the same time as divans.

The British divan is a box foundation, supporting the mattress as part of a bed. The kind of support is variable. The sides of the divan are predominantly made of wood. There are several kinds of divans.

Sprung divans have supporting springs, often coils, the equivalent of our box springs. There are two basic types, edge sprung and solid edge. In the solid edge divan, the wood side continues up to or very near the top surface, enclosing the coils on the sides and ends. In a fully sprung divan, the coils continue to the edge, the outer coils providing edge support to the mattress. This kind of support is suitable for Bonnell coil, offset coil and continuous coil innerspring mattresses, but its use is often discouraged for pocket coil, memory foam and latex mattresses.

Another type of mattress support in a divan is wooden slats, the equivalent of the European style wood slat base. Slat bases are the preferred foundations for some American mattress companies, such as European Sleep Works in California and Design Sleep in Ohio. Slatted top divans are quite commonly sold by British bed retailers, paired with all kinds of mattresses.

A solid top divan is essentially a platform bed, and it is a frequent match for specialty sleep beds with memory foam mattresses and latex mattresses. For example, the divans Dormeo pairs with its foam spring mattresses are described as “all wood construction,” the perfect description of a platform bed.

Another style is the adjustable divan. It comes with the adjustable bed fitted into the wood framed box. In the flat position, it looks like any other divan bed.

One advantage of divans as bed foundations is the availability of storage space. Most divans have drawer options: 2-drawer, 2+2 drawer, 4-drawer and foot drawer. In a 4-drawer divan, all four drawers are the same size, while with the 2+2 option the drawers near the head are narrower. The named options are for two-person beds.

Sprung divans may also have storage, but the drawers are not as high since springs take up the top half of the frame. Foot drawers are found on adjustable divans, since that is the only accessible space left.

In US retail terminology, “box spring” has come to mean any box-type foundation, whether it has springs or not. This is a carry-over from when the foundations were almost all box springs. Now real box springs are in the minority. Most box foundations here have solid or fixed slat tops.

Almost all divans Full size and up are split models, with left side and right side units. This is reasonable, since it facilitates delivery and set up.

So far, at least two mattress companies sell divans with their mattresses in the U.S. Hypnos Beds USA is a joint venture of Paramount Sleep of Norfolk, Virginia, and Hypnos, the British luxury mattress manufacturer with a royal warrant. The other is Dormeo North America, a subsidiary through the London branch of Dormeo Octaspring, an international manufacturer of foam spring mattresses. If more British beds are marketed here, we will hear “divan” more often as the foundation for a bed.

Using “divan” as the term for a framed box foundation may be a good thing. Since the market share expansion of memory foam, latex and pocket coil mattresses, real box springs have declined, even as foundations for traditional coil mattresses, replaced by platform and slatted box foundations. Yet many major retailers still habitually call any framed foundation a “box spring,” which is confusing to consumers. “Divan” is an inclusive term, making a box spring one of the divan types.

This entry was posted on Tuesday, July 28th, 2015 at 10:15 PM and is filed under adjustable beds, bed frames, box springs, coils, foundations, wood slats . You can follow any responses to this entry through the RSS 2.0 feed. You can leave a response, or trackback from your own site.

One thought on “Divans and Ottomans: The Alternate Foundations”